« Do The Wealthy Flee High Taxes? | Main | Giving Your Business Away »

The basketball season for the Oklahoma City Thunder is over after the team lost in the Western Conference Finals to the Golden State Warriors, but the team is still part of an ongoing estate battle. 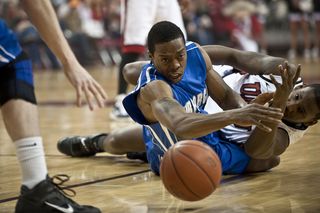 Aubrey McClendon was at one point one of the most important men in the oil and natural gas industry in the U.S. However, by the time he passed away in a car crash in March of 2016, like many other people in the industry, he had fallen on hard times as commodities prices fell dramatically in the past few years.

Now, his estate must sort through a complicated web of companies that have fallen in value and figure out some way to pay McClendon's creditors as Business Insider reports in "The case of a dead oil and gas mogul takes an unexpected turn, and it involves the Oklahoma City Thunder."

At the time of his death McClendon owned a 20% stake in the Oklahoma City Thunder NBA franchise. Because of the decrease in value of McClendon's business interests some of his creditors believe that basketball team ownership stake might be the estate's most valuable asset. This has caused them to intervene in the estate case.

The creditors fear that the estate will sell the ownership stake to McClendon's widow at less than market value and they are asking the court to make sure that does not happen. Attorneys for the estate suggest that the creditors are jumping the gun as the stake has not been sold yet and any sale would have to meet with the approval of the NBA.

To learn more about estate administration and probate, please visit my website.

Reference: Business Insider (May 28, 2016) "The case of a dead oil and gas mogul takes an unexpected turn, and it involves the Oklahoma City Thunder."